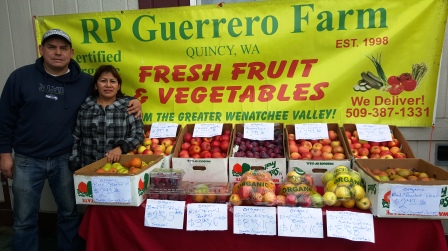 The “RP” in the farm’s name stands for owner and farmer Roberto, and his wife Petra.

Roberto’s family owned a small farm in central Mexico, where he learned to tend the family orchard from the age of seven. Immigrating to the United States at 14, Roberto did seasonal work in farming communities along the West Coast, always dreaming of the day he could own his own farm. In time, he managed to see his dream realized, including sending oldest son, Jesus, off to attend college in Corvallis and become a local educator. 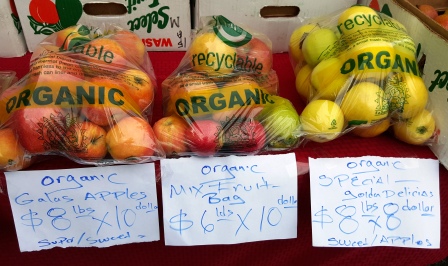 Raul Guerrero is a co-owner of the family farm, and along with his two brothers and his parents, the family has worked together to build their farm from the first four acres they purchased in 1998, and planted with apples, to the 55 acres they now own today.

Certified Organic since 2008, the 55 acre farm is planted with a mix of orchard crops such as apples,cherries, pears, nectarines, and peaches, with about 3 acres set aside for vegetables, including tomatoes, peppers, and asparagus.

Noting that the RP Guerrero Farm’s top priority is growing the best organic produce. “I feel proud to be at
the Everett Farmers Market every Sunday, enjoying great people,
and I hope to be here many more years, bringing delicious fruits and vegetables from our family farm,”Raul Guerrero.

This holiday season RP Guerrero will be offering organic holiday mix fruit bags and boxes for purchase at the Everett Farmers Market and Craft Fair.  Be sure to stop by early to get yours while supply lasts.