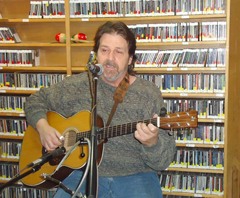 As a National Touring finger-style guitar picking, harmonica bending, singer songwriter Tim Fast should by all rights be a household name.

Tim Fast could be a character in one of the gems-of-a-song he writes and sings. He’s a dust-covered man who has traveled the roads in search of whatever song is over the next rise. That sense of adventure has given him a catalog of great original songs that have touched audiences from coast to coast and all the way from his native Minnesota down to the Texas Gulf Coast.

Tim taught himself to play guitar at a young age (he still doesn’t read music) and his first guitar was a Silvertone his parents bought him after he tried building his own guitar after seeing the Beatles on “The Ed Sullivan Show” when he was 8. He counts the late Chicago singer-songwriter Steve Goodman as one of his biggest early influences. After seeing Goodman perform in Minneapolis in 1975, Tim decided, “That’s what I wanted to do the rest of my life.” From then on, his life was about music.

He has toured most the US performing his songs that have touched the hearts of his now many dedicated fans.  click here to find out more