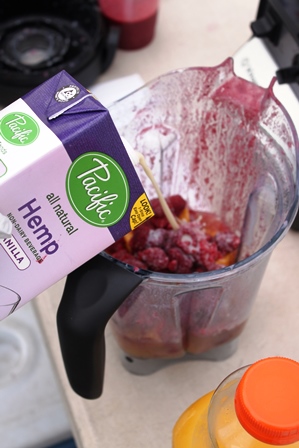 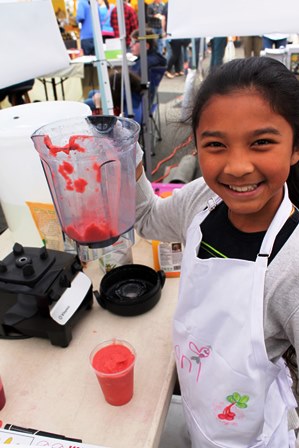 If you’ve been wanting the Everett Farmer’s Market to have a vendor churning out that perfect raw, organic Sunday beverage, your wish has come true. Wani’s Organic Smoothie Bar made their farmer’s market debut on the second Sunday of the year with a menu inspired by summer’s bounty. Their smoothies are nutritious, wholesome and the perfect fruit-based beverage to sip and walk around the market with.

Wani’s Organic Smoothie Bar is (nick)named after owner Tom Lamonte’s daughter, Malani Rein (it’s how her younger cousin pronounced “Malani”). The name is not the only creative inspiration Malani shares with business. “We collaborate on everything because we make smoothies every night,” Tom says. Tom plans on using the income from their stand to fund Malani’s college. Tom’s not a newcomer to business world. His father started a successful Northwest-based wild foods business 28 years ago. “He always did direct-to-restaurants. Now we are doing more direct-to-consumer stuff,” he explains.

The family’s farm in Burlington is where the frozen berries used in the smoothies come from. “We grow most of the organic stuff there. We started foraging for wild berries up in the mountains and about 6 years ago, we bought a farm up there.” The wild berries make their smoothies rate 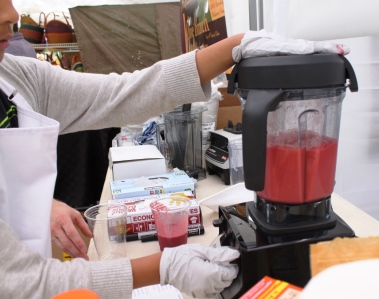 even higher than normal on the antioxidant scale. “Ours are 4 to 8 times higher in antioxidants. It’s a lot more nutritional. All the wild stuff is 100% spray-free because it grows on forest land. Organic is better when you talk about farmed berries but wild is even better because there are no sprays whatsoever. It’s all Mother Nature,” Tom says.

And you can taste it all for yourself when you visit the Everett Farmer’s Market. Malani is an ace when it comes to making a smoothie on their blender. Out of the 4 flavors on their menu, Rango Tango is her favorite. It has organic mango, organic raspberries and organic bananas in the mix. You can also make your own smoothie from 3-4 of the fruits they have on offer. The smoothies cost $6.75 and $1 of every purchase goes to their local Boys and Girls Club.

Next time you’re at the Everett Farmer’s Market, go say hi to the young team at Wani’s and grab a smoothie while you’re at it.

Edlyn G D’Souza is a writer and the more she says that, the truer it becomes. She has her roots in Goa and Mumbai in India, where she worked as a journalist for 5 years. She now lives in Washington where she writes in her blog egeedee.com, draws cat stuff, never tires of seeing Mt Rainier and dreams about changing the world through her stories.